Book Review: We Are On Our Own by Miriam Katin 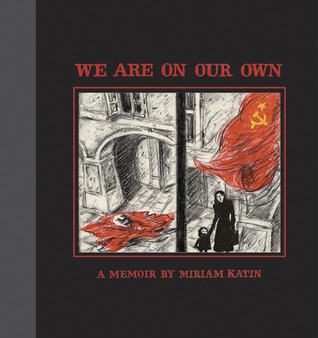 I found this one at the bookstore before Christmas, and requested it from the library.

It's an effective graphic memoir of a little girl's experience hiding from the Nazis and Russians in Hungary in the final years of World War II. It's told in disjointed memories, primarily from stories her mother told, as the author herself was too young to remember much of it.

A young mother and her child must go on the run after they receive notice that they're being relocated to a ghetto. Their friends spread the word that the mother committed suicide to throw the authorities off the trail. They hide in the countryside, and spend two years on the move to avoid violence and hunger.

The story is largely told in flashbacks between 1944-45 and the 70's, when the child has grown and has a little girl of her own.

The images are sketchy, but beautiful, done in pencil with occasional red, and is as powerful as a work of art as in prose.
on Saturday, January 03, 2015