Book of Mormon was really funny. One of the people sitting nearby had warned that it was supposed to be "worse than South Park," and that it was the most walked-out-of musical in the history of Broadway. I knew nothing about the play going in, though I expected it to be irreverent. No one walked out that I saw, and there was a lot of laughter.

Irreverent? Bet your ass. It's about two young Mormon men on mission in Uganda. As with most comedies, things do not go as planned. In a lot of ways it's a buddy comedy. The two missionaries are a tall, thin overachiever and a short, pudgy screw-up. It's a fish-out-of-water comedy. The missionaries are ill-prepared for conditions in Uganda. And it's going to have a lot of songs that are musically and thematically familiar to Broadway musical fans.

By chance I happened to stumble upon this necklace from etsy in an old post today: It looks remarkably similar to a pendant I made, that I called "cherry bomb."

I'd forgotten all about it.

Our boss brought in brownies for May Day. He asked me if I knew what the may pole thing was about. Of course it's a fertility thing. Pretty much any ancient ritual having to do with poles is a fertility thing. It makes sense if you think about it. They were trying to get the earth and animals randy and fertile. What would all the village maidens dancing around a gigantic phallus make you think of?

Happy May Day, by the way.

Today's Tarot card is the Ten of Pentacles.
A family, including an older person, two younger adults, a small child and two dogs stand under an archway leading into a city or castle keep. It's literally raining coins. 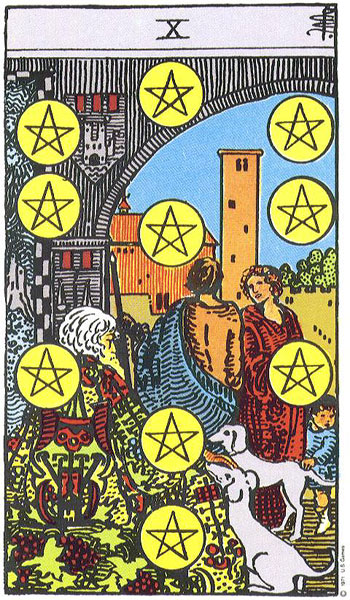