Today's Tarot card is the 2 of Cups
A young man and woman stand facing each other in a field, each holding a cup.  The man reaches to touch the woman's hand. Their expressions are gentle. Between them is a caduceus and above them a winged lion head.

Twos are generally considered partnership cards, and that shows clearly in the illustration for today's card. It can also mean reconciliation.

I honestly don't know of any partnership in the offing, or of a person I need to reconcile with.

Today's art is a cameo from 1835 by George W. Jamison, done of Andrew Jackson. 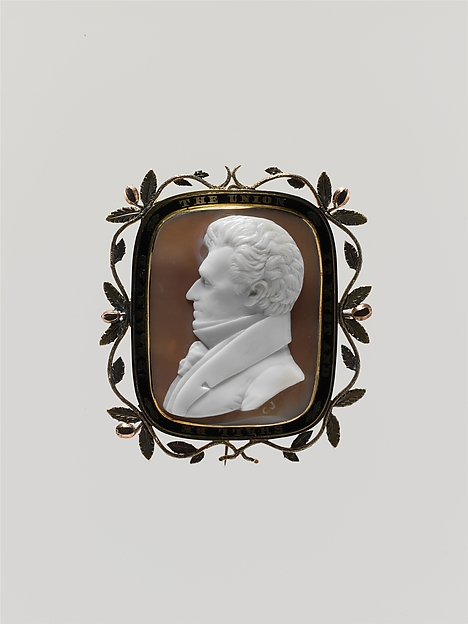 Today I'm grateful for:
1. Hearing from my mom and two of my daughters.
2. Another evening to myself
3. Pleasant conversation with the bus driver on the ride home

Of note in the world:
1. MSN reports that militant Russian supporters are accused of distributing leaflets to Crimean Jews in Donesk. The fliers allegedly said that all the city's people of Jewish descent over the age of 18 have to register (at a cost of $50) with the Commissioner of Nationalities (the what??). Other sources add that the registrants must also list all their property. Secretary of State Kerry has confirmed the reports and condemned those responsible.
In a day or so we should have more reliable information on exactly who's responsible for this and whether it's legitimate. This could be a baseless attempt to intimidate, an outright lie, an attempt to further discredit the Russians, a hoax. Whatever its origin and intent, it's an outrage.

2. The FDA is warning that the process of grinding up a woman's uterus so it can be removed laparoscopically could cause cancer cells to be spread throughout the body.
How are they just figuring this out now?