It's been a long time since I posted anything of substance, but it isn't because I've had nothing to say. October was kind of crazy, and it's taken me this long to even start catching up with things.

One big thing that I accomplished in the last few weeks is to create my own deck of Tarot cards, using images that resonate for me. I'll go into further details another time, but for now just know that there are 78 cards in a deck: 56 "Minor Arcana" cards, which evolved into the playing cards we know today (though the playing cards today have three "court cards - Jack, Queen King - while the Tarot add a Page to the group and call the Jack a Knight. Then the 22 cards of the Major Arcana, which represent a life's journey of a fool (or innocent, depending on how you view it). So, lots of cards, lots of meanings, lots and lots of pictures. 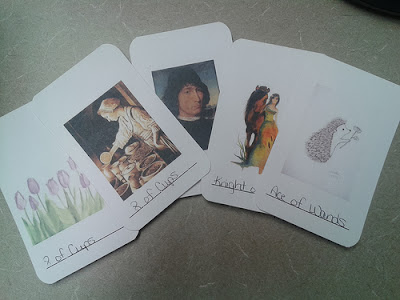 Each image was printed onto an Avery flash card, and is about the size of a regular playing card. Then I had-wrote the name of the card on the bottom. On the back I'll write notes about my impressions and meanings from the cards. And they'll just be for me, for study, reflection and enjoyment.