Yes, it's been nine days since my last post, which breaks the chain on my 101 Things in 1001 Days goal of posting once per week.

I've been pretty lax these last few weeks, but not as lax as you might think.

I watched Serpico, which was on one of the movies lists, but haven't reviewed it yet.
I participated in a political activity (more on that later).
I completed my goal of replacing 10 of my favorite Nora Roberts books on Kindle.
We've tried new restaurants. I've seen old friends.

Today is quiet. It's a beautiful day, but I feel home-y, so I'll be goofing around the house and on the computer.

Now about that political activity:

August 1, the Marriage Equality Act went into effect in Rhode Island. So of course, a certain notorious church was out in force. Or should I say "four-ce." 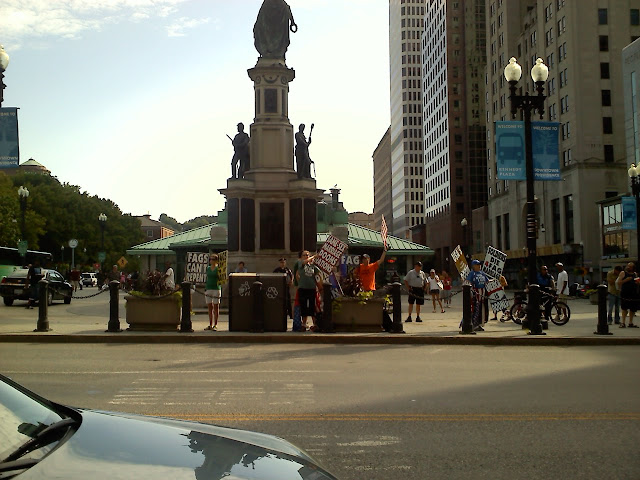 That's the four of them at Kennedy Plaza. I know this because I was on the other side of the street, in front of City Hall. As were about 100-200 other Rhode Islanders who had come to either counter-protest or to get married (or to go on about their day because, you know, it was just a Thursday for most of the world).

I didn't know about the counter-protest, although it would have been naive to think there wouldn't be one. But since I hadn't seen any information about it, I decided to go to City Hall and, if necessary, be the one voice of congratulations and support for people who might otherwise be hearing only damnation and abuse.

I respect the rights of those few individuals to peaceably assemble for the redress of their grievances. I happen to disagree with them.

I didn't shout at the protesters, but I cheered for those getting married (regardless of their gender. I'm sure heterosexual couples were also getting married that day). When the protesters left Providence, I went back to work, feeling pretty good about the fact that, in order for a hate group to protest at our City Hall, they had to be imported from more than 1,000 miles away.
on Saturday, August 17, 2013

Email ThisBlogThis!Share to TwitterShare to FacebookShare to Pinterest
Labels: 3rd 101, about me